By Mark | Published
Jun
29
2009
Our night at Walmart in Grande Prairie was uneventful and relatively peaceful. We were up early this morning and filled up at Mohawk for $0.859/litre before hitting the road before 8 am. We knew we had a long day in front of us if we wanted to make Fort Nelson, B.C. Of course we gained another hour on the clock too as we switched from MST to PST., so we already had one hour in the bank. Our first stop was just inside the B.C. border at Dawson Creek for the mandatory photo of the gang at Mile 0 of the Alaska Highway. 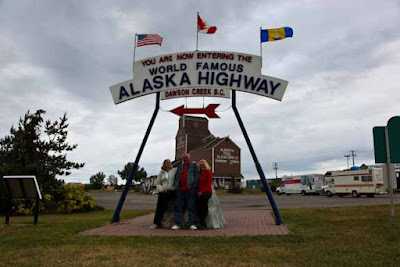 We hit some hilly sections along the way today especially coming into Fort St John near Taylor. 12% grade coming down into the valley and it gave us a fabulous view of the valley and bridge that we would eventually drive across. My nephew, Matt, used to be stationed here with the RCMP. Chris still has those pictures in her camera. We continued on towards Fort Nelson and stopped along the side of the highway around mile marker 143 (according to Mile Post magazine) for a bit of lunch. You can see us in the rest area under a fabulous blue sky, along a highway that just never ends. After lunch, we got stuck in a bit of an RV convoy or caravan for over 90 minutes. I think there were 9-10 RVs all in a row travelling around the speed limit. Amazingly, some people just had to play leap frog and pass one or two Rvs at a time, even on blind corners and double yellow lines. I know…..let it go….. 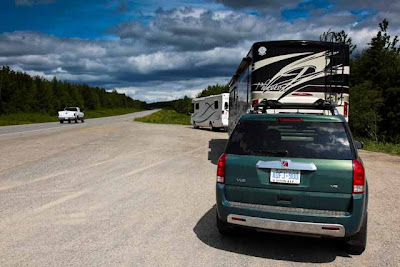 It started raining about 30 minutes out of Fort Nelson. Not hard, but enough to make everything dirty and to splatter us with road grime and mud. We are parked in behind the IGA store on 50 Ave S which we found listed as a free overnight parking spot on Overnightrvparking.com. The store manager confirmed we could stay. In fact, two other motorhomes joined us about an hour ago.

We enjoyed a nice supper at a new Boston Pizza just down the street before returning to our motorhome where Jim and Jane taught us how to play hand and foot canasta. For the record…Jim and I won.

Tomorrow, we are going as far as Liard River Hot Springs where we are hoping to stay for a couple of nights. The lodge says we can get into their campground for $32 per night but we may get lucky and find a drive up spot at the Provincial Park for only $19 per night. Time will tell. As Jane reminded us today…..it’s all about the journey.

This entry was posted in Alaska, Campgrounds.