By Mark | Published
Jun
13
2009
We left Ottawa around 10 am yesterday after topping up at a MacEwen gas station on Bank Street near our camp ground that was still selling diesel for 79.5/litre. The drive along the Ottawa river was beautiful. Chris’s only concern was no sleep after her nightshift but she managed to doze off occasionally. Thankfully, we managed to find a Tim Horton’s along Hwy 17 in Chalk River and that perked us both up. The road up past Mattawa was very rough. Note to Dalton……spend some $$$ in this area!! 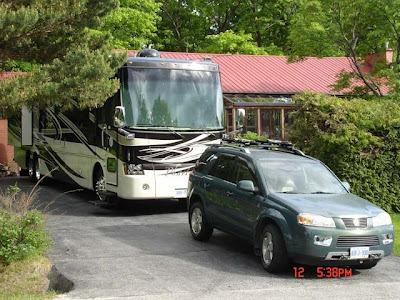 We pulled into North Bay and topped up at a Pioneer station selling diesel for 87 cents/litre which is not far off prices in Ottawa. We stayed overnight in the driveway of an old family friend in North Bay. We were all stationed together in Germany with the Canadian military in the early 60s and her two boys, along with my brother and I, were the best of friends. We yakked for hours catching up on old times before heading off to Kelsey’s for a marvelous supper.

Still noting potty smell in phaeton occasionally if we use the facilities while mobile. Still working on a solution as well. Hoping to make Sault Ste Marie or maybe even Wawa today.