By Mark | Published
Aug
22
2009
Grizzly Bear at Fish Creek
We have been having a great time in Stewart despite the rain. We even extended for an extra day. Saturday morning, Chris and I were up early and off to Fish Creek with our camera gear to catch some photos of the black and grizzly bears dining on spawning pink and chum salmon. The parking lot was over half full when we arrived at 7:30 am and there were lots of photographers with some pretty serious looking equipment already set up. I set up along side of them and then we all waited for the bears to arrive. One grizzly was under the bridge but left as we arrived. Then it started to rain, heavily at times, while we waited for almost two hours. 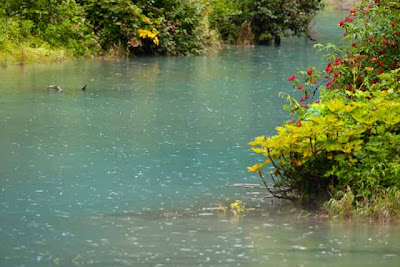 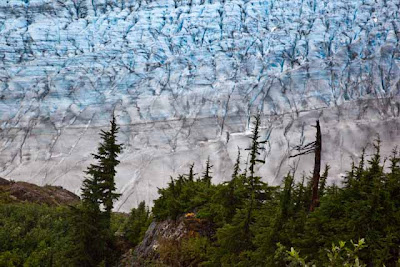 Salmon Glacier Treeline
I talked to several other photographers and met Ruth Hoyt and John Pickles from Linn, Texas. They spend most of the summer up here taking photographs. They also teach nature photography workshops in Texas and invited me to contact them when we are south this winter. You never know….. 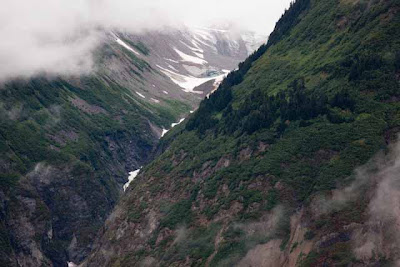 Finally, enough was enough and we had it with the rain. No bears in two hours made it and easy decision to pack up so we could at least dry out at little. Jim and Jane drove up as we were stowing our gear in the parking lot. We joined them for a drive up the mountain to Salmon Glacier. The clouds and rain made photography difficult but we managed to get some great shots anyway. 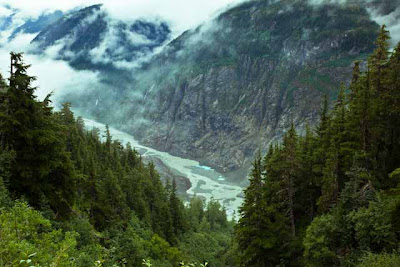 Chris and I headed back to our motorhome for an afternoon snooze. I went to the office first about extending the extra day and was told we would have to move as our current spot was part of a block of sites reserved for an RV caravan arriving Saturday afternoon. We were given a large site big enough for both our motorhomes and moved right away. Then it was snooze time. 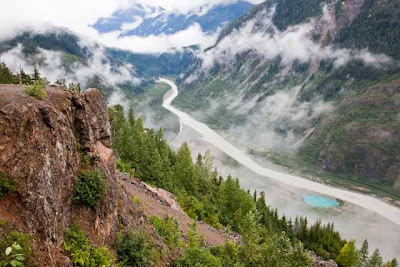 Following an excellent casserole supper by Chris, we all headed back to Fish Creek for some more bear viewing. We saw several black bear in the area dining on berries and salmon. Then one of them did a quick U turn while walking down a dirt road and came back running, high tailing it for cover while glancing back over his shoulder. We soon found out why too……as a huge grizzly bear came sauntering down the trail an went into the river. We actually saw it pounce on a large salmon using its front paws and then heard bones crunch as it killed the salmon with a quick bite from its powerful jaws. The grizzly marched into the bushes where it promptly ate its catch before coming back for more. I managed to get some excellent shots and a little video as well using my Canon 5D2. The light was fading fast though so finding a fast enough shutter speed was a little tough. 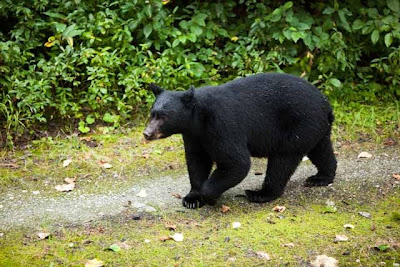 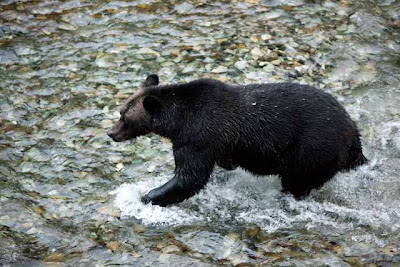 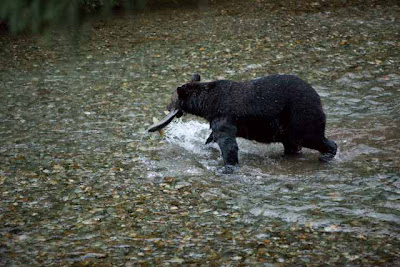