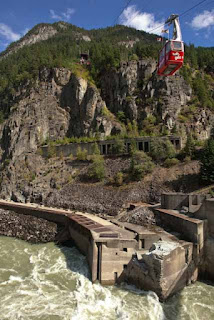 On Tuesday, the four of us drove up to see Hell’s Gate in the Fraser Canyon for the afternoon.  It was the first real sunny weather we have seen in at least 5 days.  Hell’s Gate is a canyon area on the Fraser River near Boston Bar with huge rock walls rising from the river and first written about by the explorer Simon Fraser in 1808.  Click on the title to be taken to the Air Tram’s website.  Hell’s Gate Airtram features a cable car ride down into the canyon where one can enjoy a suspension bridge across the Fraser River, fudge factory, cafe, fisheries exhibit, gift shop and observation deck.  Adults pay $17 for the cable ride. 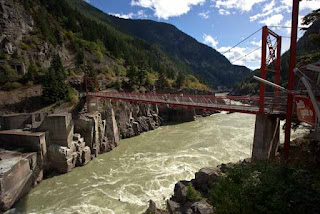 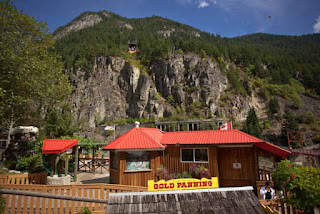 The drive up through Yale was very picturesque and only took about 40 minutes.  On the way back we stopped at the Pioneer’s Cemetery in Yale to look at some of the headstones dating back to the early 1800s.  Many laid to rest were of European ancestry. 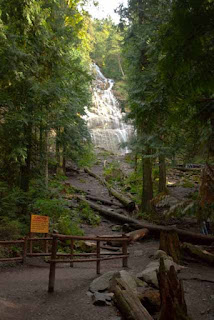 Our last stop on the way back to Cultus Lake was at Bridal Veil Falls Provincial Park.  Unfortunately, my photograph of the falls does not so it justice at all.
An excellent supper was had at Jim and Jane’s last night followed by canasta.  When will the bleeding stop?  The boys went down in flames again last night for the fourth time in a row.  Excellent playing girls!
This entry was posted in British Columbia, Entertainment, Photography.