By the time I woke up on Tuesday morning, Chris had already arrived in Toronto from Halifax and in fact, was already in the air on her way to Denver.  I went for a nice run along Putah Creek and then a walk around the campground to cool off.  Canyon Creek Resort is located on Putah Creek, right behind Monticello Dam which was built by the US Dept of Interior back in 1957.  There isn’t much water flowing through the dam but apparently there is still enough in the creek for some great trout fishing.  There certainly seems to be lots of people fishing anyway. 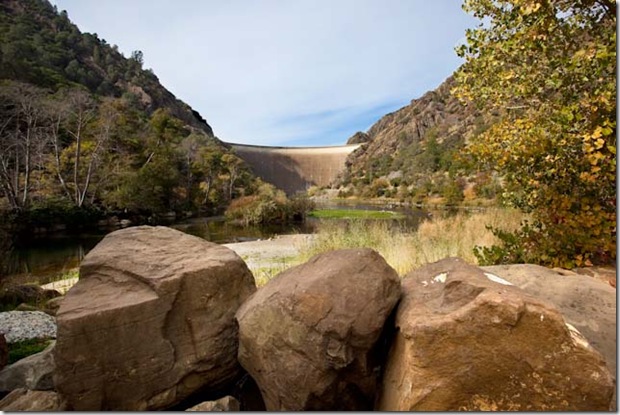 I headed off to Sacramento around 11:30 am and fuelled up on the way in.  Sacramento International Airport is much smaller than I thought it would be.  There are two terminals and it appears they may be building a third one judging by the amount of ongoing construction.  Chris’s United flight arrived on time and we were on our way back fairly quickly after a stop for groceries at a Super Walmart and a Starbucks.

This morning, I gave Chris a walking tour of the campground and then after a bit of lunch, we headed west on Hwy 128 in the Vue to do a little exploring.  Monitcello Dam is on Lake Berryessa and a pretty imposing structure from the top, but unfortunately it is protected like Fort Knox, with wrought iron gates, fencing and cement abutments, making it impossible to get a good photograph.  We continued on into Rutherford where we mailed a birthday card for my mother who will turn 80 later this week.  The canyons around Berryessa are very scenic with many vineyards covering much of the countryside.  Lake Berryessa reminds me a lot of Shuswap Lake in central British Columbia, in that both are huge recreation areas for house boats during the tourist season.  We saw many house boats in marinas along the lake.  We continued on a circular tour through Napa and then back to Canyon Creek via Hwy 121.

Tomorrow, we plan to do a little hiking on some of many trails we have seen in the area.

This entry was posted in California, Campgrounds, Photography.