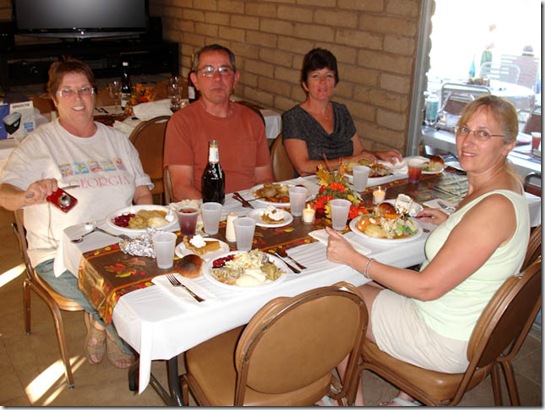 Thanksgiving at TT Palm Springs.  Dennis is a little under the weather and didn’t want to give it to anyone else, so Barb took his dinner back to the bus for him.  Barb, Bob, Julie, Chris and I enjoyed a great potluck dinner in the adult centre next to the swimming pool. Even had a glass of blackberry wine to go with it.

We played pickleball here at the preserve yesterday.  They have two single courts here surrounded by white picket fencing.  Playing on them took a little adjustment as there are quite a few shadows cast on the courts by the palm trees.  There are lots of players too, so we rotated off all four players after each game in order to cut down on the waiting times.  Hard to get into any kind of rhythm that way because you sit longer than you play.  I’m not convinced rotating all four players off is any faster than using the paddle rotation method we have seen and used so well at all other TT Preserves, but we still had fun and got to play some pretty good matches.  Bob, Julie, Chris and I went across the road to the public courts on the opposite side of I-10 this morning and played for a couple of hours.  Dennis was not feeling well and stayed behind.

I spent the rest of day finishing a new Lee Childs paperback.  It was nice to be able to sit down and read again for the first time in many months.  I think being able to extend our stay from Dec 4th to 13th yesterday has something to do with that.  It’s always easier to relax over a longer stay than the shorter ones.  Chris has been busy with her beading and worked quite a while with Barb and Julie yesterday and today.  My lady has some talent!

Hoping to hit the pool for some lap swimming Friday morning before pickleball.  Barb also ran down two possible places near here that may still have flu shots available and I’ll check those out tomorrow afternoon.

This entry was posted in California, Campgrounds, Entertainment, Thousand Trails.