We left Port Orford, OR at 9:30 am to head further south down Hwy 101 and for the first time in weeks, all the lights on the Vue worked.  I think I signalled every lane change, just because I could.

Our drive took us along the coastline and also through some spectacular forest scenery.  Our first stop was in Brookings, OR where we fuelled up for $2.76/gallon.  Good thing too because diesel prices are a tad higher in California.  We had to drive through an agricultural checkpoint at the California state line.  I was asked how long PP had been in storage in Ontario and explained that it had never been in storage since we bought in Florida in May 2009.  Apparently, there is a gypsy moth problem in Ontario and rigs stored for the winter have to have the under carriage checked before entering California.  I was also asked about citrus fruit, but only had a couple of banana left, so no worries there. 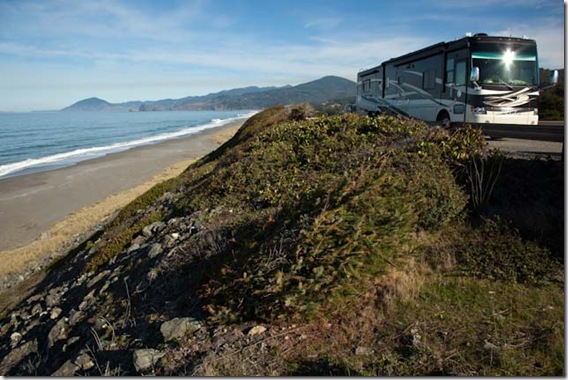 We stopped several times along the coastline to take pictures and have a stroll on the beach.  Not much fun walking a nice beach by myself, but Chris will meet me in Sacramento in only six more sleeps.

We talk everyday online and her month long trip back to Nova Scotia to help ailing, ageing parents has not been easy.  Hopefully, the rest of our winter will go smoothly.  I managed to find two intact sand dollars for her on the beach though. 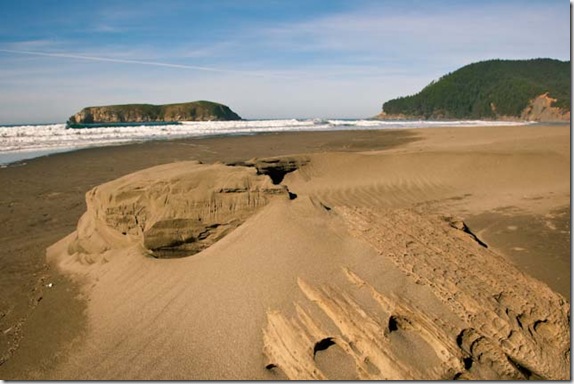 The drive on Hwy 101 through the Redwood Forest was very nice.  The trees we saw from the road were certainly big, but no bigger than the trees we saw in the ancient forest east of Prince George, BC back in August.  Originally, we had planned to spend a couple of days at an RPI park in Klamath, CA but when I called them several weeks ago, they said the park would be closed by the end of October and sure enough, it was.  Lots of parks were, which now seems odd, given the last few days of sunny weather along the coast.   That is why we opted for a couple of nights at Emerald Forest in Trinidad with our Enjoy America affiliation. 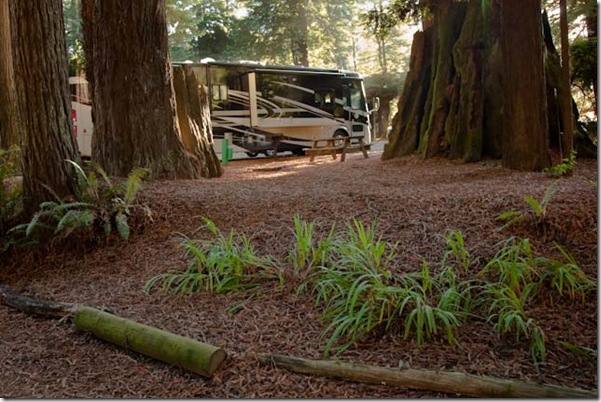 We popped into Arcata last night for a look around and some supper.  Arcata is the home of Humboldt State University and it was easy to tell that this was definitely a university town.  We had a great supper at Arcata Pizza and Deli before heading back to our campground for the night.  Looking forward to a little exploring in the morning.

This entry was posted in California, Campgrounds, Oregon, Photography.