Today began a little warmer than yesterday and was most enjoyable while playing pickleball this morning.  The six of us was just the right number to play on one court.  Those not playing volunteered as ball retrievers. 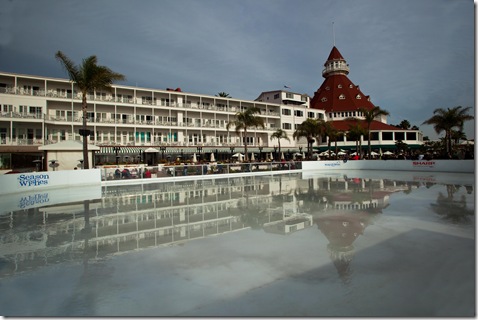 This afternoon we all went out to Coronado for a little more sightseeing.  We started off at Imperial Beach, drove up to Coronado and then across the bay bridge into San Diego, past Petco Park and the San Diego Convention Center into Seaport Village.  We stopped in Coronado to see the huge Hotel del Coronado and stroll around the shops and grounds.  Built in 1887, this hotel has hosted many presidents and movie stars over the years, including Marilyn Monroe.  As we walked around the beach front side of the hotel, we came across an outdoor skating rink on the grounds.  Pretty unusual for this part of the country. 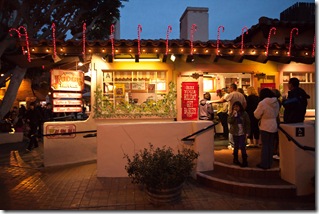 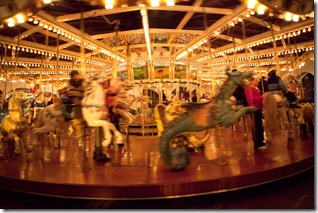 After a bit of lunch, we headed on into Seaport Village.  Jim and I were highly amused by two street magicians performing for the crowds.  They were pretty good too.  The girls did a bit of shopping in the village which in turn gave us free parking for the 2 hours we spent in the area.  I played around with ISO 6400 on my Canon 5D Mk2.  The last three photos were all taken after dark in available light.  We bought coffees from the fudge shoppe.  You can see Bob and Julie standing in line in the photo.  I tried to get some blurred effects on the merry go round photo by using a slow shutter speed.  The last photo shows the Hyatt Hotel tower in San Diego against a moonlit sky.  I used Topaz’s Denoise 3 to clean up the noise in the last photo and think it turned out quite well. 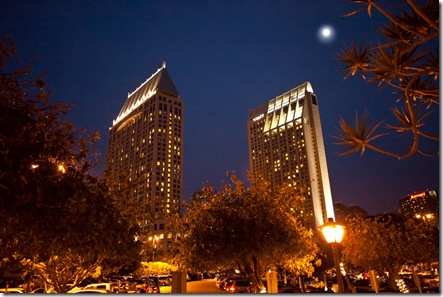 We are hoping the weather cooperates with us tomorrow morning.  Chris and I are heading out to the cliffs in La Jolla to photograph some brown pelicans.

This entry was posted in California, Photography.