Chris and I joined Al, Trudy, Jim and Jane for a visit to old town San Diego on Thursday.  After a long day at the zoo yesterday, we had thought about maybe playing a little pickleball Thursday morning and then having a quiet day at home.  But Jim knocked on our door early asking if we wanted to follow along in our car, which we did.  Old town is just that, a collection of historical buildings and artifacts in the originally settled area of San Diego.  The restored buildings were very interesting.  Remember the Studebaker?  Well it turns out that they first made wagons here in California before moving on to the automobile in later years.  Even saw several stage coaches that were in mint condition. The Wells Fargo stage coach was particularly nice to see. 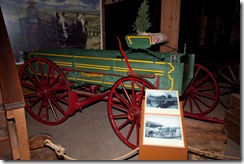 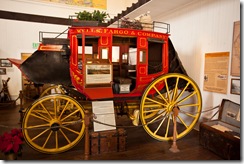 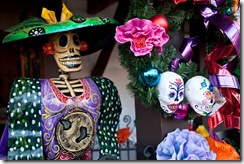 We all enjoyed a coffee and treat from a little bakery shop in among all the stores.  Lots of locally handcrafted Christmas decorations to be had.  I settled for a few photos of them instead. 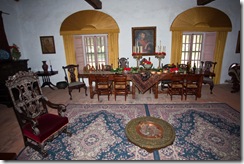 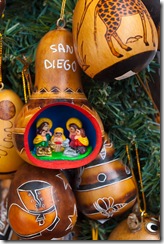 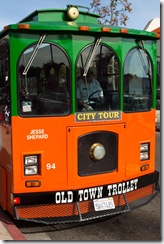 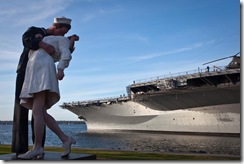 Around 1:30 pm, we all headed down to Anthony’s on the water front for some very good fish and chips.  There were a number of ships and sailing vessels moored not far from Anthony’s, including the Star of India, a decommissioned Russian submarine and the aircraft carrier, USS Midway.  We had a short walk around the park next to USS Midway and found a number of statues dedicated to the troops over the years.  There was even a group of statues clustered around a statue of Bob Hope doing one of his many USO shows……complete with audio recording as well.  He still cracks me up. The last photo above shows huge statues of a sailor and nurse opposite the bow of USS Midway (CV-41).  It was getting late in the day so we decided not to tour the USS Midway which is now a floating museum complete with a collection of 25 restored aircraft on board.