By Mark | Published
Dec
23
2009
Monday morning, we had eight people for pickleball at Pio Pico, Ed & Sandra, Chuck & Julie, Bob & Julie and Chris & I.  We still only had the one court to play on, on the south side park, but Terry, the recreation director, is back to work tomorrow and will find us a second net to string up on the court next to ours. Al & Trudy are also here but had a prior commitment and couldn’t play.  Jim & Jane arrive later today, so we should have a nice sized group come Wednesday, Thursday. The two courts on the south side are the best courts here at Pio Pico.  Apparently, the north side court is lined incorrectly and one kitchen is smaller than the other. 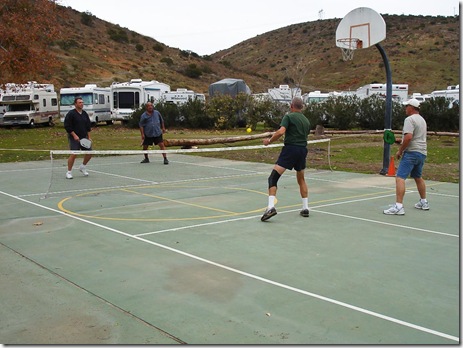 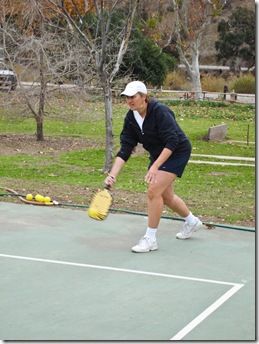 We are planning a day at San Diego Zoo and also an early morning trip to the La Jolla cliffs to shoot some pelican pictures.  Hoping to get some nice photos at the zoo as well.  Chris has been there before, but this will be my first time.

Today’s photos are from Monday’s pickleball.  Ed and I against Chuck and Bob. Chris showing her post service follow through.  Note the missing fence around the courts.  It rained last night and is very cold and windy today, so no pickleball.  I did manage to get a second net strung up this afternoon, so we should have two playable courts once the weather improves.
This entry was posted in California, Entertainment, Thousand Trails.