We left TT Palm Springs on Sunday morning after saying our goodbyes at the pickleball court and headed back west on I-10 to Banning, where we headed south on CA 79 to Hemet.  It was a little windy until we got off I-10.  All the wind turbines were spinning as we headed back into the hills.  There was a little construction on CA 79 near Ramon Expressway but traffic was light so it wasn’t a problem.  We arrived at TT Wilderness Lakes at 12:30 pm and saw quite a bit of water laying around on roadways and also in the fields.  Apparently, they experienced very heavy rain on Saturday night.   This is our first visit to this park, so we unhooked and drove around in our Vue to find a good site.  We settled on site 168, a large gravel site backing on to one of the canals in the park, and coincidentally, not too far from the pickleball courts.  The neighbouring cattle station is not too busy and the smell is hardly noticeable. 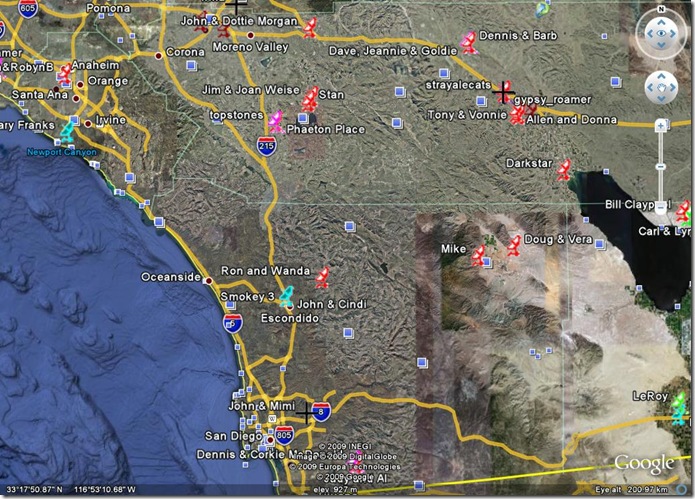 We saw some familiar faces at pickleball this morning.  Brian and Judy, Richard, Al and others from TT Palm Springs.  Ed and Sandra also popped in to play a few games on their way down to TT Pio Pico.  It was a little cool playing on the shaded court but the sunny court was fine.  Kind of nice not having to sit for too long between games too.  Ron and Phyllis arrived in their rig just as we finished.

This afternoon, we went for a drive into Lake Elsinore and popped into the Outlet Mall on I-15.  A little disappointing really, but we did find some shorts for Chris.  Not very busy at all.  We stopped by Diamond Valley Lake off CA 79 on the way back.  There is a huge lake behind the dam, but unfortunately the view point is only open Thursday to Sunday, as was explained to us by a security guard.  Looks like we’ll have to see it another time, as we are only here until Wednesday.

This entry was posted in California, Campgrounds, Maps, Thousand Trails.