The sun shone brightly today as we headed off towards Boulder City to see Hoover Dam. Named one of the Top 10 Construction Achievements of the 20th Century, Hoover Dam continues to draw crowds more than 70 years after its creation. Attracting more than a million visitors a year, Hoover Dam is located in Black Canyon, just minutes outside of Las Vegas. In 1930, construction began on the Hoover Dam, the largest of its kind at the time. Despite the remote location and harsh working conditions, it was completed in less than five years — two years ahead of schedule — and well under budget. The dam is named after America’s 31st president, Herbert Hoover, who played a large role in bringing the nearby states into agreement about water allocations, settling a 25-year controversy. The dam has been called Boulder Canyon Dam as well as Boulder Dam, but Hoover Dam was reinstated as the official name by Congress in 1947. A National Historic Landmark, Hoover Dam is the highest concrete dam in the Western Hemisphere, standing at more than 725 feet above the Colorado River. With 17 generators producing 4 billion kilowatts of electricity a year, it also is one of the country’s largest hydroelectric power facilities. Operation and maintenance of the facility are solely supported by revenue from power sales. Check out the new Hoover Dam Bypass being built in background. We watched them lower one humongous concrete span into place from cables strung across the Colorado River. Pretty amazing to see! 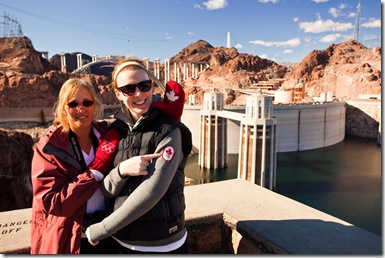 We were back to Thousand Trails by early afternoon for a rest and then headed off to Las Vegas Blvd for a little more sightseeing. Definitely more to see and enjoy at night. We enjoyed the gourmet buffet at Bellagio and then strolled about the shops and strip until 7 pm before heading over to Caesar’s Palace to see Bette Midler in concert. The show was pretty good. The ladies both enjoyed it, but I think would have preferred to see Celine or Cher, myself. Perhaps next time.