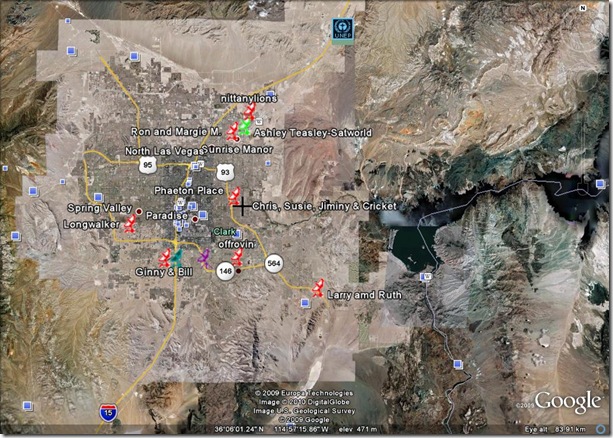 We said our goodbyes at La Posa south this morning and hit the road for Las Vegas around 9 am.  We followed advice given us by our new Tiffin group friends and headed up AZ 95 through Parker and Lake Havasu City.  We turned west on I-40 to cross back into California at Needles and then north on CA 95 all the way into Las Vegas.  Our prior research told us that AZ 95 was a much better highway than CA 95 and we certainly had no complaints about the road.  Once we crossed into Nevada, 95 became 4 lanes divided anyway and runs right into I-515.  Weather wasn’t great on the way and we could tell it was cooling off quite a bit as we headed north.

We had hoped to stop at Love’s in Lake Havasu City and maybe wander over to see London Bridge but the weather was pretty overcast.  Besides, the Love’s in Lake Havasu City is actually some miles north of the city at the intersection of AZ 95 and I-40.  We did fuel up at Love’s and grabbed a great burger for lunch at Carls’ Jr.  Our first time fuelling at Love’s and it was a great experience.  This one had truck pumps and then separate pumps for RVs and cars, much like Flying J but the station was 10 times cleaner than any Flying J we have ever stopped at.  I also asked the attendant why the RV pump price for diesel was almost 9 cents a gallon cheaper than what was posted on their highway billboard sign.  Turns out that RVs are exempt the fuel tax in Arizona, unlike commercial trucks.  That discount price is already accounted for on the RV pumps but not the commercial truck pumps.  So we will use the RV pumps in the event we have to again fuel up at a Love’s.  $2.749 per gallon by the way, compared to the $2.99 per gallon we were paying in California!  Makes a bit of a difference.

TT Las Vegas is located on Boulder Highway in Henderson, only a few miles from the strip and McCarron airport.  Our first time here and we find it to be quite a nice little park.  Try as we might though, we just could not get level in the two sites we tried.  After trying for almost an hour in the first site, we asked for another site.  Not level here either, but closer than we were in the first one.  The staff is very pleasant.  There is a nice store on site.  Outdoor pool and hot tub but with 52F water at the moment, the pool is closed.  There are some trees but we had no problem setting up our Datastorm and have excellent internet and Bell ExpressVu reception.  Picked up lots of local channels with our digital antenna as well.  All sites are crushed stone but the roads inside the park are paved.  We were told before hand that one must stay within the yellow lines at this park.  We are well within the lines even with our slides out.  Definitely no awnings out though.  One thing of note……we had to go to Walmart and buy a sewer donut and hose slinky.  Apparently, Nevada law states that donuts must be used and that all sewer hoses must be off the ground.  Lots of sites available at present.  Only 30 amp service though.

Raining quite heavily tonight and the forecast for the next week is not looking too promising either, but we are snug inside.  We can definitely put the shorts and sandals away for a few weeks though.