By Mark | Published
Aug
18
2010
I picked Chris up this morning after her night shift and threw my bike on top of the Vue so I could go for a nice ride while she slept in peace.  Another nice day in Ottawa, a little cool to start off but it warmed up into the mid 20sC in relatively short order.  I didn’t have any particular destination in mind for my ride but knew much of it would be on the bike path again.  I stayed on the Ottawa side of the river this morning and wound up out in Britannia Bay in the west end of town.  Along the way I passed by Remic Rapids and stopped to inspect the rock sculptures.  Every year local artists erect free standing rock sculptures along the banks of the Ottawa river.  There has to be hundreds to see in all shapes and sizes.  No adhesive of any type is used to hold the scultures together…..just gravity.  One wonders why they don’t topple over.  It has become a real tourist attraction over the years.  The sculptures fall down over the winter once the ice and snow arrives, but every spring they go up again.  Pretty amazing! 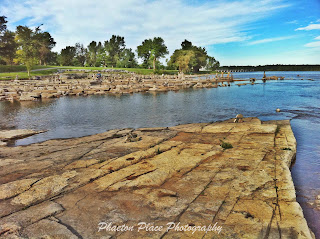 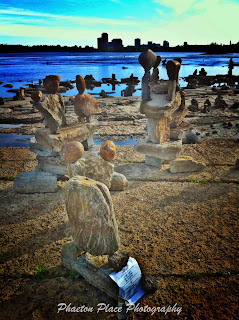 I followed the bike path back into Ottawa and arrived on Parliament Hill just in time for the changing of the guard.  Lots of tourists taking in the show this morning and they weren’t disappointed.  I followed the troops and marching band off the Hill over to the armoury on Queen Elizabeth  Drive where I again picked up the bike path.  I continued south to Mooney’s Bay grabbing a coffee a bagel at Tim Horton’s before heading out past the airport and back to our campground.  Hard to believe that 4 hours had just flown by.  Might be time for a snooze this afternoon. 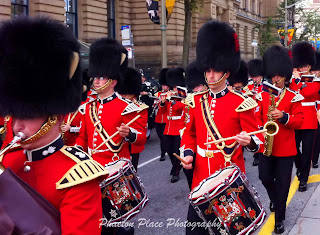 All photos taken with my iPhone 4.

This entry was posted in Entertainment, iPhone, Photography.