By Mark | Published
Nov
22
2010
Well last night did not go well for us as far as our electrical power was concerned.  While watching TV, we noticed that our inverter was kicking in and out which was in turn bumping our Datastorm internet satellite offline every few minutes while I was trying to upload photographs from our hike in Lost Dutchman State to my Smugmug account.  I checked our Progressive Industries surge protector and noted an error code on the remote display.  That display also showed me our 50 amp outlet was putting out 135 volts on each leg!  270 volts instead of the usual 200-240 volts. No wonder we were having problems!  The surge protector was doing it’s job very well and prevented a power surge from potentially frying some of our RV electronics.  Our neighbour was not having any problems, just us.  Guess that’s what you get for $10.09!  I just unplugged for the night and we went on batteries until this morning.  I plugged back in this morning and things seemed to be back to normal.  I was going to speak to someone in the office but I think they were closed all day today.  We hit the road just after 9 am and the office was still locked.

We could have stayed another night at Countryside but both of us thought it better to get through Phoenix on a quieter Sunday than to have to fight rush hour traffic on a Monday morning.  We also wanted to check out a Western Horizons Resort along the way in Ehrenberg, AZ.  Colorado River Oasis is a great park with huge gravel sites located right on the banks of the Colorado River.  We got in here with our Resorts of Distinction membership and only had to pay $3 for a 50 amp site.  Great water pressure and electric power, free wifi with tengo internet and a Flying J right out on I-10.  We coasted into the FJ with less than 10 gallons of fuel remaining.

Once we got all set up for our one night stay, we went for walk to check out the river.  There is actually bamboo growing in huge groves along the river. The park is only about half full and there are quite a few Canadian registered RVs in the park.  Think we will relax this evening and may run the Vue over to Flying J for cheap fuel later.  We’ve been told fuel is quite bit more expensive in California. 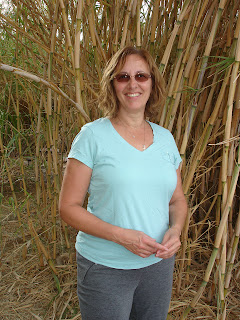 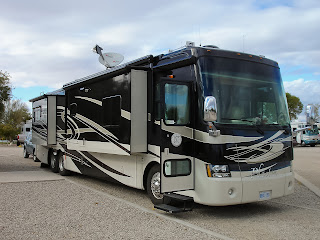 The first two photographs were taken at the ghost town we visited yesterday and are HDR composites of three separate photos put together in Photomatix Pro.  HDR is a process which can render better detail across the spectrum of colors, highlights and shadows in a photograph.
This entry was posted in Arizona, Campgrounds, HDR, Photography.