By Mark | Published
Apr
08
2011
Things were a little soggy in South Jetty this morning as we packed up.  It had rained most of last night but the sun was shining brightly this morning.  In fact we had great weather all the way to Seaside with the exception of a few showers in Tillamook.  We only had about 180 miles to go but Hwy 101 was pretty twisty and windy today so it took us most of the day to get to our destination. Our first stop was the vista point at Devil’s Cauldron in Tillamook County.  We hiked down to the bottom of the path and got up close and personal with some of the waves as they pounded on the rocks.  It was a bit tricky getting in and out of the vista point as it was on a tight corner on the opposite side of the highway.  Thankfully, traffic was light and we managed to get in and out without incident.
Our next stop was at Boiler Bay where we again were witness to the power of the sea as it rolled in to shore.  Spring flowers were just beginning to pop out.  There weren’t any RV spots in the vista point but we managed to find a nice wide shoulder after we passed the vista point entrance that was more than adequate for Phaeton Place to pull over while we grabbed a few photos and had a look around.  The grassy areas were super saturated with water so they must have been getting lots of rain here recently. 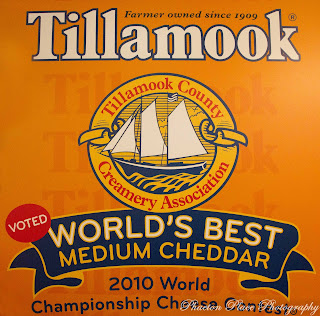 We continued on into Tillamook and stopped at their famous cheese factory for a tour, some free samples, and bought some packaged cheeses.  We especially like their cheese curds and the garlic cheddar we sampled today.  They make ice cream too but the line ups were quite long so we passed on that.
I was under the mistaken impression that Phaeton Place had been in Seaside back in Oct 2009 on our way to southern California but looking back on our blog I see we stayed at TT Oceana and not LTR Seaside.  We were pleasantly surprised with the size and condition of this park.  Nice sized sites with full hook ups and 50 amp available on one side of the park.  The ranger told us this park is one of the most popular in the northwest.
Chris and Sharon kept busy beading for most of yesterday afternoon while I worked on my photos.  Bent & Sharon are following us into Seaside tomorrow.  We’ve decided to stay here for 3 days and then to head for Birch Bay right from here.  We’ll likely overnight at Camping World near Mount Vernon on Sunday night.  I think it wise to tackle I-5 through Seattle on a weekend instead of a weekday.
On a final note, I visited the online Apple store this afternoon and see my new iPad 2 is officially listed as “Prepared for Shipping”.  Won’t be long now……..:)
This entry was posted in Campgrounds, Entertainment, Oregon, Photography, Thousand Trails.