Sunrise Over Our Bus

It's the end of our first week in Red Bay. We arrived in town last Saturday at noon and spent the first three nights in a full hook up site across the street at Detail Depot before being assigned site 70 at Allegro Campground. On Monday, we got a call to go to Bay 42 to have our engine checked after our water pump failed on our way south. They drained and flushed all coolant, changed out the serpentine belt again and refilled our radiator with new coolant. So far everything is working well. On Wednesday, we received a visit from Norris who basically visits with all arrivals to check and see if they will need the “A” Team on site service, an express bay or a full service bay. Given the water leak in our passenger slide, we will be going into a full service bay. Billy, in scheduling, thinks we should most likely be in a service bay by Wednesday of next week. They will have to partially remove our passenger slide in order to change out the roof of the slide and reseal it all but Norris says they'll just loosen the slide and tip it backwards in order to get at the roof. Should be interesting to see and you can bet I'll be taking lots of pictures to document the process. We are hoping the rest of our punch list can be seen to while the slide is being repaired.

We moved our old Pressure Pro tire pressure monitoring system from the Phaeton over to the Bus but I don't like the size of the Pressure Pro display. It is huge compared to the EezTire display and the only place I can put it is over part of my dashboard instrument cluster. The EezTire can be stuck to a window with the included window mount. I emailed the company and asked if they would have a show special on a 12 sensor model at the Tampa Suoer Show in January. Tom in their support department, offered me a great deal on a complete unit which included a repeater (for units longer than 53 feet) as well as 8 flow through sensors for the Bus and 4 anti theft sensors for the Vue. Basically the same deal they will be selling at the Super Show….and no tax! Should be here next week.

This morning we headed for CustomRV in Vina, AL to have the owner, Brannon Hutcheson, install the Wilson Omni antenna from our Phaeton onto the roof of our bus. Brannon decided to install the antenna on the roof over top of the bathroom vanity at the rear of the coach. This was close enough to the entertainment centre in driver's side bedroom slide out. He fished the cable through the ceiling and then down the right side of the bathroom vanity onto the wiring harness at the bottom of the slide out. I didn't have enough coax cable to run up into the entertainment cabinet but have ordered another 10 feet of black RG58 cable from 3G Store which should be here early next week. We'll pop back to Brannon's to finish the job before we leave Red Bay. 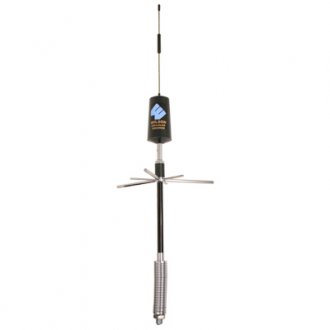 So the end of our first week in Red Bay has arrived and next week appears to be promising. We've decided to take a run into Tupelo, MS tomorrow morning. Visits to Sam's Club, Starbucks, Barnes & Noble and other places are on the agenda.

This entry was posted in Alabama, Allegro Bus, Technology.